By dint of presenting Wheeleo® to the people I meet, I realise that Wheeleo® generates the same questions, the same reticence, the same astonishment?

And yet, it is clear that the greater the functional impairment of walking seems to be, the more positive the impact of this new technical walking aid. The initial reluctance of the therapist then gives way to a mark of even greater interest in this innovative product.

I have decided to do this article to present you everything you need to know about the Wheeleo, hoping perhaps one day to discuss it in person and allow you to test it.

This article is the result of 4 years of experience in neurological rehabilitation with Wheeleo® at the Centre Hospitalier Neurologique William Lennox (Belgium). Feel free to leave your thoughts or testimonials as a comment. 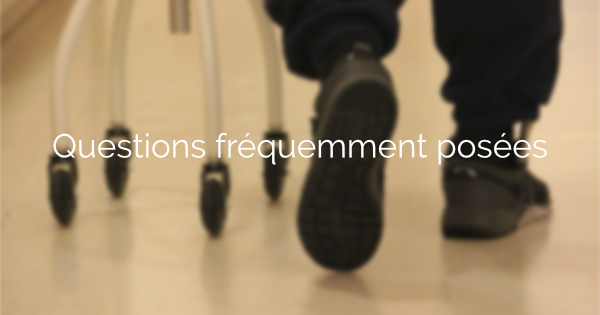 In a nutshell: the Wheeleo® is the equivalent of a one-handed rollator. It is useful for a hemiplegic person with only one valid hand or for a person who does not have enough room in their home to handle their rollator. It is the ideal transition from a rollator to a cane.

2. Always in the right place!

If you have not yet had a Wheeleo® in your hand, you may be thinking that the risk is that you may go outward or forward and/or get carried away by the Wheeleo®. This same fear was present when the rollator arrived several decades ago. If this happens, then other assistance should be considered. You know, however, that patients who dive forward with their rollator are not the majority. If this problem is present with your patient, the Wheeleo is not suitable for him. In this case, another technical aid should be considered.

In fact, the risk is low. To move the Wheeleo® sideways, you have to make a sideways movement. If you make this same movement with a classic cane when you lean on it, it tips over and it's the fall. The Wheeleo® will move without tipping over.

It is important to understand why the patient might make a lateral movement. During an imbalance we all have the desire to restrain ourselves from falling by placing our hand in a specific place, in the axis of the imbalance. It's natural, spontaneous and quite logical. The classic cane will rarely be in the right place to correct the imbalance easily. Unlike the classic cane, the patient will spontaneously place the Wheeleo® in the right place, in the exact spot that will allow him to correct the imbalance. Even when supported, it can be moved to adapt to the body position and potential imbalances.

The fact that Wheeleo® is naturally in the right place induces a feeling of comfort and security. The patient manages his balance better and feels naturally able to walk faster.

The hemiparetic or deficient patient (age, amputee, ...) at the beginning of rehabilitation walks in a jerky way. Faced with his deficits, he logically seeks to constantly maintain two supports to keep his balance. We do exactly the same thing during a delicate passage in the mountains. He then adopts a 3-step walk: he moves one leg, then the other leg and then stops on both legs to move his cane.

With the Wheeleo®, the patient will be able to maintain constant support on his cane. He will then be able to alternate his support. He keeps his two supports but adopts a walk closer to normal: a two-step walk, without pause time, more symmetrical. It gains in fluidity and speed. Instead of advancing 2 times out of 3, he advances 2 times out of 2. He gains on average 30%. A first study has objectified this result. While waiting for the publication of the article, you can download the poster presented at the ISPRM 2018 congress in Paris in July 2018. www.bit.ly/isprm2018posterwheeleo

Improvement in the fluidity of walking is the most perceptible improvement, by the patient, the therapist and by any observer.

When the patient lifts his cane to move it, he stops on his two supports to keep maximum balance. Spontaneously, he will place his two supports with a small antero-posterior spacing because it is the most stable position. Walking in three stages with the displacement of the cane thus accentuates the tendency to asymmetry in the patient's gait.

In addition, the patient may be afraid of forward imbalance when moving his leg forward on the side of the cane (good side). He doesn't dare go beyond the cane because it would end up at the back of the body. In this situation, the cane will not be well placed to help correct the anterior imbalance. On the other hand, the Wheeleo® remains in front of the body, which reduces the fear of falling forward and promotes symmetry in step length.

The Wheeleo® is of course height-adjustable and can be operated with the right or left hand without changing the setting. There is a less bulky side along the body and a more bulky side on the outside. Height adjustment is done by pulling the indexing knob without unscrewing it. The more the patient progresses, the higher the handle can be placed (bent elbow). This will provide a sense of security without allowing for significant support. It replaces the hand of the nursing staff.

For a patient with lateropulsion, we will make sure to put the handle lower in order to induce an inclination of the trunk towards the cane (seeking support), thus partially correcting the trunk's inclination towards the "outside".

The question everyone's asking, "Shouldn't there be a brake like on the rollators?"

Unlike a rollator, the sustentation base is not large enough. If the patient moving with the Wheeleo® brakes and locks the wheels, we would observe a tilting of the Wheeleo® and probably a fall.

After use of Wheeleo®, this question is generally not relevant for the majority of patients.

The presence of a cork under a classic cane does not prevent you from "going forward". The only correct way to use a cane is by doing a vertical push and not a horizontal pull or push.

With the exception of a whole section of the population, it is more interesting not to put the brakes on the rollator when the patient stands up or sits down.

Walking with a cane and a fortiori in three stages is a new coordination that some patients (neuro or geriatric) have difficulty acquiring. The patient puts a lot of attention on moving and managing the classic cane to the detriment of the rest.

The Wheeleo® is naturally well handled by the patient. No new coordination should be acquired. He adopts a near-normal gait that he knows well. The patient is then more attentive to the most important things (stepping, balance, straightening, heminegligent side, ...). It is very manoeuvrable when changing direction.

For this reason, Wheeleo® may be well indicated for people with mild cognitive impairment.

The Wheeleo® is not intended for off-road outdoor use. Indeed, the small wheels do not easily allow to pass the asperities of the external grounds (crooked pavement, gravel, ...). It can only be used on "controlled", smooth environments.

The Wheeleo® is designed for indoor use. It's a known limitation compared to a conventional cane. Or a rollator.

An alternative solution is being considered to correct this limitation.

The first clinical study (publication in progress) and patient feedback tend to show that the energy expenditure is lower. The patient is more comfortable, and more efficient (2-stroke walking). He spends less energy moving his cane. He wastes less time and energy travelling the same distance.

The first effects of Wheeleo® are directly observed from the first steps. Even a patient with long-term hemiplegia can benefit from these effects. They are easily observable and objective.

Although we have not yet been able to prove it scientifically, but through numerous clinical observations, we hypothesize that rehabilitation with Wheeleo®, at an early stage, optimizes rehabilitation. The patient could be re-educated faster and reach a better final level. Many defects are attenuated or even erased even before they appear. The length of stay could be reduced.

The direct effect of the Wheeleo® allows the patient to reach the independence threshold more quickly. He can then walk on his own and, for example, walk back to his room after his rehabilitation session. This passage is a key step in rehabilitation as it will boost rehabilitation by increasing the patient's walking volume. Instead of walking once or twice a day in physio, he will be able to walk much longer.

The Wheeleo® is above all a tool for rehabilitation. Many patients could use it during the first steps with the cane, just after the ramp or parallel bars. Fortunately for them, many of them will progress until they are able to walk properly with a classic cane (crutch, simple cane, ...). A small portion of them will have major after-effects. They will still benefit from the Wheeleo®, even when they return home or in a nursing home.

At present, there are no social security reimbursements (Belgium and France). In Wallonia, the AVIQ offers financial aid of 50€ for those who meet the criteria (under 65 years of age). Wheeleo does not fit into any existing nomenclature. She's not a cane or a rollator. It seemed more interesting to us to start by testing the product with health professionals before embarking on a lengthy process.

In view of the interest of rehabilitation workers and patients, obtaining approval for reimbursement is a goal for 2019.

In Belgium, this matter has been regionalized. This complicates matters.

The Wheeleo is a new walking stick, halfway between a quadripod cane and a rollator. It can positively modify the gait of the person using it, suggesting the possibility of improving rehabilitation (faster and better) and promoting the patient's autonomy.

What do you think? Reluctance or enthusiasm?